JazzMond Robinson‘s childhood dream was not to be a jazz pianist. Born in Galveston, TX, in 1988, he began playing trombone in elementary and continued through out high school.  By the time he was 12, he was learning piano from his grandfather the Late Charles Johnson. He learned gospel in the beginning but soon found an interest in jazz. He started listening to jazz pianist such as Oscar Peterson, Art Tatum, Hank Jones, Fats Waller and many more. It wasn’t until his senior year of high school that he decided he wanted to become a jazz pianist. While attending Texas Southern University Robinson formed his jazz trio known as Distinguished Gentlemen. Robinson has performed with many artist such as Latonya Earl, Shawn McLemore, Disney’s Regina Belle and many more. He had the honor of performing for Governor Rick Perry and 30,000 spectators during The National Day of Prayer in 2011 at the Reliant Stadium. He has opened for many musicians such as Spyro Gyra & Lee Ritenour and was the pianist for jazz pianist the Late Joe Sample and The Krusaders 2.0. He has composed a numerous of pieces from “100 degrees in the Snow” to “Creeping” all which have a high complex of style and rhythm. He is known for his big chords and fast fingers. Upon moving to Houston, TX Robinson has performed with many different bands and venues such as The Reliant Stadium, Hobby Center, Wortham Theater, House of Blues and many other main venues. Robinson had the opportunity to perform with gospel artist Latonya Earl at the home of NBA’s Tracy McGrady’s Christmas 2009 affair. Today Robinson is the keyboardist for the group The C.I.T.Y which are recording artist for GVR Records and Universal Studios. He is also the  jazz pianist for the Robin Menuett Trio. He is still performing in venues such as Red Cat Jazz Cafe’, Mosaic Lounge, Prive’ Bistro, Ovations Theater, Zanzibar and many more. 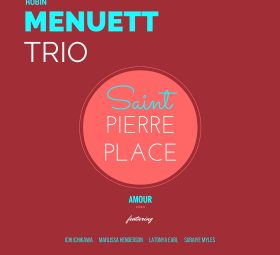